Manchester City has joined other elite European clubs by releasing their away kit for the 2020-21 campaign.

The PUMA kit is accompanied by the slogan “taking the City with us 🌃” and follows the release of the club’s new home jersey which the club debuted in David Silva’s Premier League farewell appearance against Norwich. 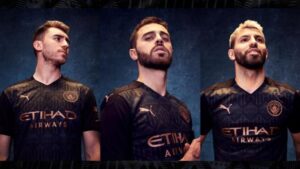 Back to the present and Pep Guardiola’s side will be preparing for their Champions League round of 16-second leg tie with Real Madrid. The Citizens hold a potentially priceless 2-1 first-leg aggregate lead.